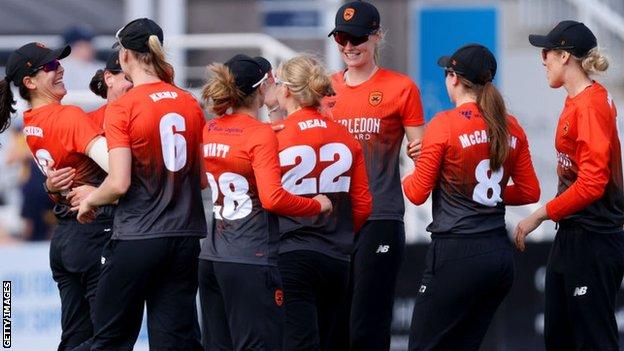 Southern Vipers won their first Charlotte Edwards Cup with a crushing six-wicket win over Central Sparks in the final in Northampton.

Maia Bouchier top-scored with 32 before Ella McCaughan (30) and Charlie Dean (7) saw their side over the line with 25 balls to spare.

Sparks won the toss and chose to bat, but never got going and made a disappointing 109-8 in their 20 overs.

All-rounder Dean shone with the ball for the Vipers, taking 2-19.

She also took the key wicket of fellow England player Amy Jones, beginning Sparks’ decline from 45-2 in the eighth over.

Underdogs Sparks reached the final after edging out holders South East Stars with a two-wicket win earlier in the day.

But they were lethargic in their innings in the final with only England’s Jones, who finished as the tournament’s top-scorer with 289 runs, seeing the ball well before she fell for 27 off 23 deliveries.

Their total was 25 runs fewer than any first-innings score they had posted earlier in the competition and the Vipers never looked in serious trouble in the chase, despite the loss of England’s Danni Wyatt for 20 and Bouchier.

They were both dismissed by seam bowler Emily Arlott, who took 2-28 as the Vipers reached 69-4 in the 10th over, but the middle-order pair of McCaughan and Dean shared a comfortable 41-run fifth-wicket stand to win the game.

The Southern Vipers’ win gave coach – and England’s former captain and most-capped player – Charlotte Edwards her first success in the competition named in her honour.

Coming into the match, former England pace bowler and Vipers player Anya Shrubsole had told BBC Radio Solent: “It’s her cup isn’t it? It would be really nice for Charlotte Edwards to win the Charlotte Edwards Cup.”

Victory meant Vipers and Edwards completed the set of English cricket’s domestic titles, having won the Kia Super League in 2016 and the first two editions of the 50-over Rachael Heyhoe Flint Trophy in 2020 and 2021.

The Hampshire and Sussex-based side also became the first team to win the Charlotte Edwards Cup without losing a match having won all six of their Group B group games leading up to the final.

‘Not our best performance’ – reaction

“Obviously it wasn’t our best performance, but the Vipers are a very strong side.

“When we didn’t get those runs, it was always going to be difficult to keep them in check. So yes, it’s disappointing.

“To be honest the wicket was good but I think we lost momentum and lost wickets at crucial times.

“We didn’t have a good partnership and it was hard for us to climb to a score we could defend.”