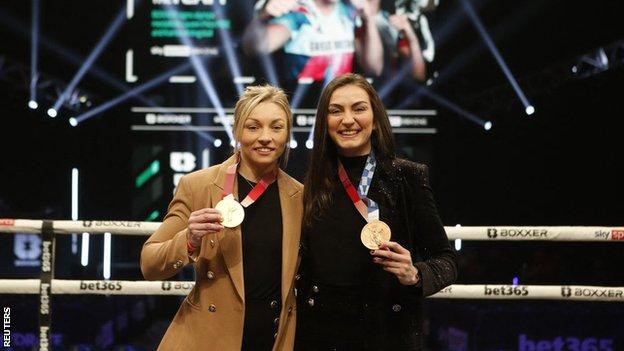 “Some people call us the double trouble act, the power couple, the dream team.”

Karriss Artingstall is an Olympic bronze medallist, a former gunner in the Royal Horse Artillery and about to make her pro debut on Saturday night in Cardiff.

She also happens to be the partner of Olympic champion Lauren Price. The couple reached the pinnacle of the amateur sport together at the Tokyo Olympics last year and have now turned professional together, signing with the same promoter.

“I think in general we’re just a power couple,” Artingstall says, with her partner listening close by.

“There’s nothing we won’t give 100% to and when we’ve got our mind set we’re both just full steam ahead with it.

“People don’t realise but boxing is a lonely sport, but when you’re doing it alongside your partner and your best friend, it’s special.

She adds: “We both just want to reach the top together. I want to be by her side while she’s pursuing her dreams and vice versa.”

From Olympic triumph to pro domination?

Fighters dating each other is not unusual.

And Artingstall admits it is a relief to have a partner who understands the stresses and strains of being a pro boxer. Their weekends are spent “chilling out” together at home.

What is less common is two elite boxers achieving world honours side-by-side. Artingstall met Price while they were both training as amateurs with Team GB.

“We were best friends for maybe over a year. And that was it but then we turned from best friends to lovers,” Artingstall remembers.

“It’s amazing because she’s like my best friend still and now we’re partners. We bounce off each other and always have a home comfort with me everywhere I go.”

France’s Estelle Mossely and her heavyweight boyfriend Tony Yoka both won gold medals at the Rio Olympics in 2016. Artingstall and Price produced their own version of that achievement in Tokyo last summer.

“It was remarkable and very special to do that all together,” says Artingstall.

‘No one batted an eyelid’

Boxing is traditionally a male-dominated environment. It is not uncommon to hear current female world champions speak about the roadblocks they faced as young women eager to box. Undisputed lightweight champion Katie Taylor had to pretend to be a boy to box in Ireland.

Artingstall turns pro at a time when women’s boxing is booming and negativity directed at female fighters has waned considerably in recent years. Taylor and Amanda Serrano made history in April as the first women to headline an event at Madison Square Garden.

Female athletes who have come out as gay is also becoming a more common feature in women’s sport and Artingstall says the boxing world has always been supportive.

“It’s always been my mindset that you love who you love. You can’t control that. There’s no point trying to fight it,” Artingstall says.

“No one even batted an eyelid. Me and Lauren didn’t come out and announce it to the GB team, it kind of just naturally flowed out of us.

“Leading up to the Olympic qualifiers was when we officially got together, but we didn’t want to that to be the story leading into the Olympics.

“We are our own people. Lauren’s got her story and I’ve got my story. But as we were going through the Olympics, because of our emotions towards one another and seeing us ringside, our team could definitely see it. It came out without us meaning to.”

‘We need people who speak openly’

Some of the best female fighters, past and present, identify as gay or bisexual. Christy Martin was one of boxing’s true trailblazers, one of their first big stars and is married to one of her former opponents, Lisa Holewyne.

Artingstall says she feels a responsibility to be open about her sexuality.

“It must be nice for people to see me and Lauren together in boxing, see how happy we are and think ‘love’s love’. Whoever you want to go through life with, it’s okay,” she explains.

The men’s code is a different story. Puerto Rican Orlando Cruz remains the only world championship level male boxer to come out as gay during his professional career.

Artingstall herself can’t explain why male fighters appear less comfortable with coming out, but she admitted being a gay woman brings challenges when you’re in the spotlight.

“I’ve not experienced a lot of homophobia [in my life]. Since we both turned pro we’ve had a few comments, [such as] ‘I’ve heard it all now, lesbians turning pro’,” she says.

“If you’re not willing to take the backlash that comes with it, it can be really hard. Social media would be hard, and if you read into those comments it can have a big effect.”

Boxing, so far, has been a whirlwind of success for Artingstall.

On Saturday she begins the next chapter with Price by her side. Artingstall brims with the same confidence that made her a force to be reckoned with in the amateur ranks.

Price, too, is considered a world champion in waiting . Not that Artingstall feels any pressure to keep pace with her partner in the workplace.

“People are surprised when we answer this, but it’s never competitive between me and Lauren,” she says.

“We always back one another. I’ve got her back, she’s got my back and we just push each other on.”