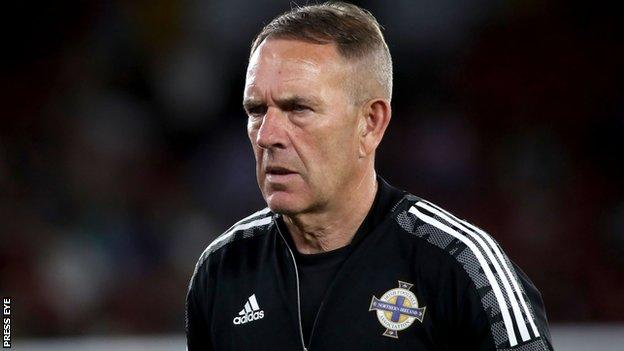 Northern Ireland manager Kenny Shiels has said there is a need for realism when assessing his team’s performances at Euro 2022.

Shiels said he was proud of how his team responded to conceding two early goals as they lost 4-1 to Norway in their opening match of the tournament.

Julie Nelson scored what was a historic goal at St Mary’s in NI’s first-ever match at a major tournament.

“The scoreline was hard to take,” the former Kilmarnock boss said.

“I thought we deserved better than that but we are three years into this programme and it will take 10 years to take us into the top 20 in Europe.

“If we can continue to progress then we can do it a bit quicker. We have to get real and understand this is an emerging game in Northern Ireland.

“We have created a monster because we have grown too quickly and are playing against teams of this ilk. It is tough.”

Two early goals from Julie Blakstad and Frida Maanum put the Norwegians in charge, with Caroline Graham Hansen adding a penalty before half-time after VAR judged that Nadene Caldwell had handled in the box.

Northern Ireland, the lowest-ranked team in the tournament, rallied after that, with Nelson delivering the special moment of their first-ever goal in a major finals by heading home soon after the interval.

However, while clearly worried about the extent of an injury suffered by leading striker Simone Magill, Shiels was keen to commend his players for how they responded to going 3-0 down.

“You are not happy when you get beaten 4-1 but there are extenuating circumstances,” he continued.

“They were nervous for the first 25-30 minutes and you can see Hansen and [Ada] Hegerberg, how good they are.

“We were up against the two best strikers in the world and we drew the last hour of the game.”

He added: “We matched them for the last hour. They had more territory but we got one v one and did a lot of good stuff.

“We created, got in behind for half an hour of the match and we pinned them back. That gives us encouragement and the girls were superb. They gave everything for their country and the fans will be very proud of them.

“It is learning all the time and you can see what we got from that. We started believing as the match matured. The experience is brilliant for them.”