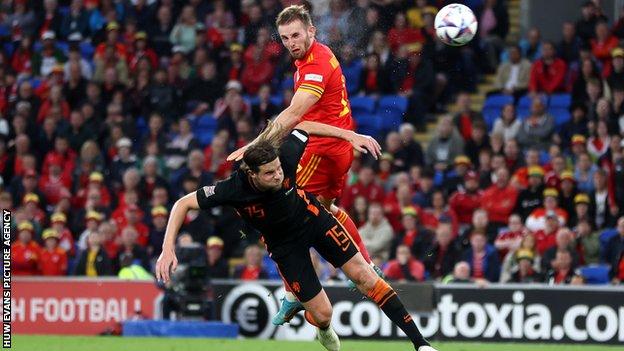 Still riding the wave of celebrations after Sunday’s play-off final win over Ukraine, Rob Page’s much-changed side started brightly as they searched for a first win in the Nations League top tier.

Dutch boss Louis van Gaal named a completely different starting XI to their 4-1 thumping of Belgium last time out, but Teun Koopmeiners’ strike gave them the lead early in the second half.

Rhys Norrington-Davies thought he had earned Wales a point when his injury-time header made it 1-1, but 100 seconds later Burnley’s Wout Weghorst nodded home to silence the Welsh crowd.

Victory for Netherlands moves them top of Group A4 in the Nations League, while Wales remain bottom of the four teams after back-to-back defeats in the competition.

Sunday’s World Cup play-off final match against Ukraine was always the priority for Wales going into this extended international break.

The seven changes made by Page highlighted that, with influential figures Aaron Ramsey, Joe Allen and Sunday’s goalkeeper hero Wayne Hennessey all left out of the matchday squad, with Gareth Bale coming on as a late substitute.

Despite that, and much like last week’s loss against Poland, Wales again went toe-to-toe against one of the world’s football heavyweights.

Wales’ first real chance came after 13 minutes, the ever-busy Norrington-Davies and Harry Wilson combined well to win a corner and from the resulting cross the Fulham man nodded just wide at the back post.

Centre back Chris Mepham almost provided an unlikely assist when his deep cross was floated perfectly for Norrington-Davies, who rose above Jordan Teze but put his header over the bar.

Netherlands goalkeeper Mark Flekken was almost left red-faced when he hesitated over a clearance and was charged down by Dan James, but the Leeds winger’s deflected attempt sailed behind for a goal-kick.

Norrington-Davies continued to cause problems and picked up a loose ball outside the Dutch penalty area before drawing a foul in a dangerous position.

Dead-ball specialist Wilson claimed the ball immediately and forced a diving save out of Freiburg stopper Flekken, who pushed the ball safely away.

After James forced another comfortable save the Dutch got a foothold in the game.

A few half-chances came and went, before a deep run from Koopmeiners was not tracked by the Welsh defence, but Ben Davies – who made countless blocks against Ukraine on Sunday – stretched to make a goal-saving tackle.

Seconds before half-time the Netherlands had the best chance of the opening period, when Cody Gakpo took advantage of a misread defensive header to race clear of Davies and Mepham.

The PSV striker cut back well onto his right foot, but his goal-bound effort was blocked by Mepham and bounced narrowly wide of the left post.

The Netherlands started the second half as they ended the first and opened the scoring five minutes after the restart.

Debutant Jerdy Schouten and Koopmeiners were afforded too much space on the edge of the Wales box and the Atalanta midfielder’s low driving shot beat Adam Davies – who had replaced Danny Ward in the Welsh goal at the break.

Wales responded to going behind well, Rubin Colwill and Matt Smith coming on, but they failed to test Flekken as they did in the first half.

That was until Connor Roberts broke down the Wales right and crossed to the back post, where Norrington-Davies rose highest.

The wing-back’s goal looked to have sealed a draw for Wales and ensure World Cup qualification celebrations continued, but Netherlands had other plans.