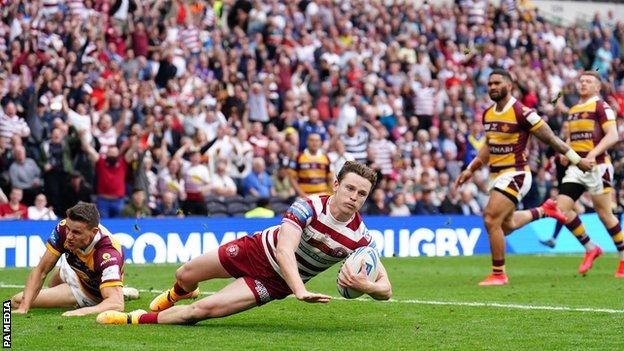 Wigan Warriors stunned Huddersfield Giants with a late try to win the Challenge Cup for a record-extending 20th time at Tottenham Hotspur Stadium.

Matty Peet’s side were favourites coming into the contest and Liam Marshall’s score gave them victory.

Ricky Leutele and Chris McQueen crossed for Huddersfield, in between Harry Smith’s try, for a 10-6 half-time lead.

Jermaine McGilllvary edged Giants 14-12 back in front after Jai Field had gone over, but Marshall had the final say.

It was a fitting finish to a well-fought final which ebbed and flowed, but ultimately Wigan came out on top for their first Challenge Cup triumph since 2013.

The final was being played at Tottenham’s ground for the first time while Wembley is used for English Football League play-off matches this weekend.

Huddersfield’s football team will be aiming to make amends for the town on Sunday when they face Nottingham Forest in the Championship play-off final.