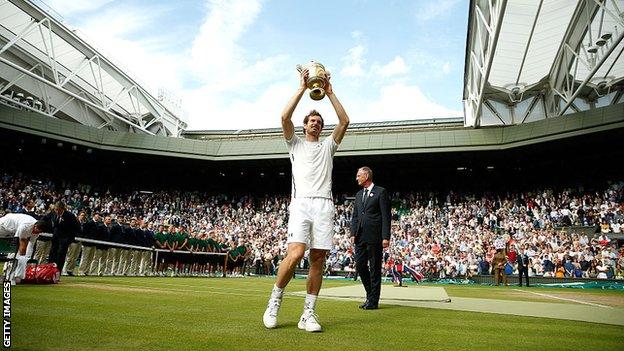 Two-time champion Andy Murray says Wimbledon will “never feel like an exhibition” despite it being stripped of ranking points by the ATP and WTA.

Japan’s Naomi Osaka has said she may not play the grass-court Grand Slam as it is now “more like an exhibition”.

“I follow golf very closely and have no idea how many ranking points the winner of the Masters gets,” Murray said.

“Me and my friends love football and none of us know or care how many ranking points a team gets for winning the World Cup,” the British former world number one continued.

“But I could tell you exactly who won the World Cup and the Masters. I’d hazard a guess that most people watching on Centre Court at Wimbledon in a few weeks’ time wouldn’t know or care about how many ranking points a player gets for winning a third-round match.

Nine-time Wimbledon singles champion Martina Navratilova has also expressed her bemusement at talk that star players may snub the Championships this summer because of the lack of ranking points.

“First of all, I couldn’t care less if there were no points given,” Navratilova told TalkTV.

“I always played for the trophies, not the points and not the money. So for me it was Wimbledon and nothing else – everything else came in second.

“So the points, it’s not an exhibition. I don’t understand that view, that players wouldn’t play because there are no points. You are playing for computer ranking? I just wanted to hold that trophy, that wonderful rose dish.”

However, Navratilova was unhappy with the decision to ban players from Russia and Belarus from competing at Wimbledon.

She added: “You have a player like [Russian world number seven Andrey] Rublev – he has written on the camera ‘no to war’ and he can’t play, so it’s just there is no winning.

Andy Murray is right – people don’t care outside of tennis about ranking points and it is a mystery to many, and players see it differently.

It was dispiriting to hear Naomi Osaka phrase it as she did even though I don’t think she was trying to punish Wimbledon by using the word ‘exhibition’. That’s just the way she sees it.

Pat Cash, the 1987 Wimbledon champion, made a point the other day about when he was talking about former champions and how they used to play for gift vouchers in the amateur days. It was for the glory of winning Wimbledon.

Naomi Osaka is a different case in terms of what she’s been through over the last couple of years but I think it’s sad when you hear modern day players saying ‘I’ll not necessarily play at Wimbledon because there aren’t any ranking points on the line’.