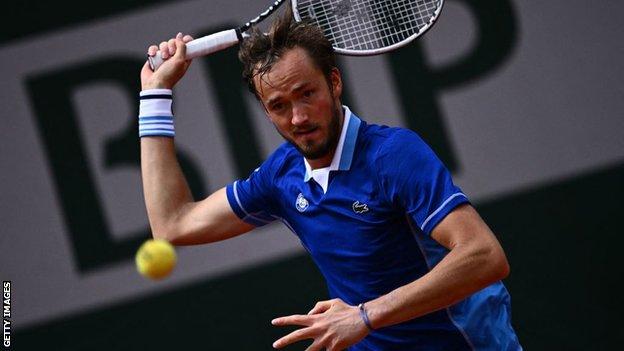 World number two Daniil Medvedev booked his place in the French Open second round with a comfortable straight-set win over Argentine Facundo Bagnis.

The Russian former world number one reached his first quarter-final at Roland Garros last year – having lost in the first round in each of his four previous appearances in Paris.

He will meet Serb Laslo Djere or Lithuanian Ricardas Berankis next.

“I love Roland Garros, especially since last year. I hope this year I can go further,” said Medvedev, who had been unsure of his participation after having a hernia operation in April.

“When I went under the operation I didn’t think I was going to play on clay, but I managed with the doctor and physio to get back. Physically, I feel 100 per cent.”

Bagnis, 32, immediately responded after seeing his serve broken in the opening game – but that was to prove a rare glimmer of hope on Court Suzanne Lenglen.

In a dominant display, second seed Medvedev won nine successive games as he efficiently settled the first set and took a commanding 4-0 lead on his way to clinching the second.

The Russian, unable to compete under his national flag because of the war in Ukraine, saw his progress checked as Bagnis, struggling with a calf issue, broke back to level the third set at 2-2.

But that only served to refocus Medvedev, who rattled through the next four games to end the contest after just one hour and 38 minutes.